A Term of the Supreme Court begins, by statute, on the first Monday in October. Usually Court sessions continue until late June or early July. The Term is divided between “sittings,” when the Justices hear cases and deliver opinions, and intervening “recesses,” when they consider the business before the Court and write opinions. Sittings and recesses alternate at approximately two-week intervals.With rare exceptions, each side is allowed 30 minutes argument and up to 24 cases may be argued at one sitting. Since the majority of cases involve the review of a decision of some other court, there is no jury and no witnesses are heard. For each case, the Court has before it a record of prior proceedings and printed briefs containing the arguments of each side.

During the intervening recess period, the Justices study the argued and forthcoming cases and work on their opinions. Each week the Justices must also evaluate more than 130 petitions seeking review of judgments of state and federal courts to determine which cases are to be granted full review with oral arguments by attorneys.

When the Court is sitting, public sessions begin promptly at 10 a.m. and continue until 3 p.m., with a one-hour lunch recess starting at noon. No public sessions are held on Thursdays or Fridays. On Fridays during and preceding argument weeks, the Justices meet to discuss the argued cases and to discuss and vote on petitions for review.

When the Court is in session, the 10 a.m. entrance of the Justices into the Courtroom is announced by the Marshal. Those present, at the sound of the gavel, arise and remain standing until the robed Justices are seated following the traditional chant: “The Honorable, the Chief Justice and the Associate Justices of the Supreme Court of the United States. Oyez! Oyez! Oyez! All persons having business before the Honorable, the Supreme Court of the United States, are admonished to draw near and give their attention, for the Court is now sitting. God save the United States and this Honorable Court!”

Prior to hearing oral argument, other business of the Court is transacted. On Monday mornings this includes the release of an Order List, a public report of Court actions including the acceptance and rejection of cases, and the admission of new members to the Court Bar. Opinions are typically released on Tuesday and Wednesday mornings and on the third Monday of each sitting, when the Court takes the Bench but no arguments are heard.

The Court maintains this schedule each Term until all cases ready for submission have been heard and decided. In May and June the Court sits only to announce orders and opinions. The Court recesses at the end of June, but the work of the Justices is unceasing. During the summer they continue to analyze new petitions for review, consider motions and applications, and must make preparations for cases scheduled for fall argument.

The United States Constitution provides for the existence of the Supreme Court in general terms, as can be found in Article III, “The Judicial Branch”. Within this Article, the Court’s basic nature is provided in Section 1, on “Judicial Powers”, and its operation toward the American legal system in Section 2, “Trial by Jury, Original Jurisdiction, Jury Trials”. Beyond these brief provisions, the general shape taken by the Supreme Court has been determined by the specific ways in which it has been implemented.The basic area of oversight for the Court, for instance, is phrased in the Constitution as consisting of “Cases” and “Controversies”. The first Chief Justice, John Jay, interpreted this provision as prohibiting the Court from making general policy decisions, as he declined to do during President Washington’s administration, thus setting precedent. Similarly, the stipulation that Justices could serve “during good behavior” has been interpreted as allowing life terms. The concept of “judicial review”, today held to be one of the Court’s primary functions and its main source of political power, was only exercised in 1803, after thirteen years of the Court’s existence. 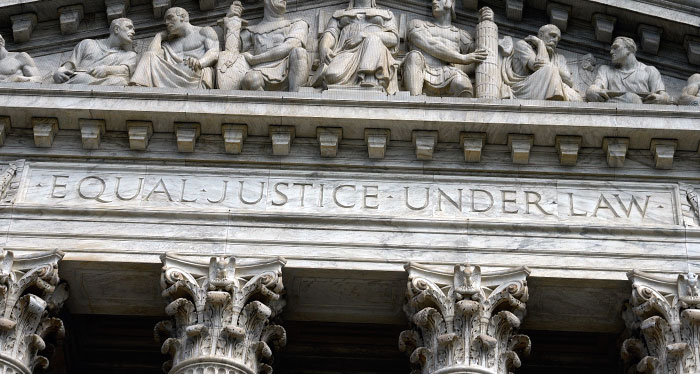 History of the Supreme Court

Stare decisis, or “maintain what has been decided,” embodies this principle, which holds essentially that judicial decisions should be made in concert. A key aspect of the United States’ system of judicial precedence is the observation of mandatory precedence, which arises from the hierarchy through which the courts are ordered. A decision made by a higher court will thus be binding for a decision made by a lower court in a similar case.

Persuasive precedence, on the other hand, can be provided by a lower court, though as a factor to take into consideration rather than a binding condition. The Supreme Court itself may decline to follow the principle of judicial precedence, as has been shown in its reversals of previous decisions. The Court considers judicial precedence to be less than fully binding when it comes to questions of Constitutional interpretation.

John Jay was the first Chief Justice of the United States Supreme Court, appointed in 1789 by President Washington. His reign as Chief Justice helped build the foundation of practices, which helped the Supreme Justice system gain recognition as a reputable judicial branch. The time John Jay served as Chief Justice was mostly dedicated to implementing guidelines and regulations for the Court system to follow.

Stemming from his childhood John Jay has always expressed keen interest in governmental politics, and he catered to a number of problems that presented itself as a result of war as well as weak practice measures. His time spent as Chief Justice initiated many Federal regulations that provided the strength the Supreme Justice is associated with today. The great advisement John Jay delegated as Chief Justice led to his re-election of the role in 1795, which he declined. He continued to serve the United States as a political influence to the practices of the Government system until he retired in 1801.

During his ruling as Chief Justice many other members did not agree with his views on regulating State and Federal practices. However, the beliefs of John Marshall helped strengthen the value of the Supreme Court.

* Decisions that Directly or Indirectly Apply to the Constitutional Cannabis Argument for Amending ,…

The Issue of Freedom of Religion Explained

The complainant, Alfred Smith, had been employed by the State of Oregon as a drug rehabilitation counselor. His superiors dismissed him upon learning that he had used a controlled substance, peyote, in the course of a ceremony performed in the religion he practiced. The State then withheld unemployment benefits to Smith on the grounds that his own misconduct had cost him his position.

The State Court of Appeals found against this decision on the grounds that the peyote usage was protected under religious freedom and found support in this decision from the State Supreme Court. Oregon thus submitted an appeal to the U.S. Supreme Court to argue that the right to freedom of religion did not apply to either the initial dismissal of Joseph Smith or the later denial of benefits to him. The case then turned to the broader question of the constitutionality of Oregon’s laws on drug usage.

The Supreme Court found that the Oregon law used to make the decision against Alfred Smith did not violate the First Amendment’s guarantee of freedom of religion in that it was generally aimed at the usage of such substances by citizens and did not specifically address the religious purposes to which they might be put. The law in this way could not be said to be aimed at Alfred Smith’s religious freedom to practice his faith in a general sense, but rather to a specific way in which he decided to practice it. In this way, the majority opinion of the Supreme Court held that it could be reasonably sure that the Oregon law was not covertly aimed at giving the State the ability to violate the freedom of religion. It was instead, according to the Court’s opinion, a “neutral law of general applicability”.

The Court has upheld this principle in regards to claimed violations of religious freedom in a number of cases extending beyond the subject matter of narcotics. In a well-known example of the limits which may be placed on the freedom of religion, the practice of polygamy among Mormons, as was once common, has been strictly forbidden.

* In the case of Employment Division v. Smith, the Court thus advised the complainant to seek the passage of laws allowing for the consumption of peyote for religious purposes, noting that such laws had already been passed elsewhere, while upholding the ability of the State to enforce the laws in their present state.